Disclaimer – This write-up is more about Director Vasanth as an inspiration of mine rather than a critique of his movies. 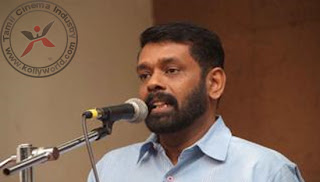 A son is having dinner with his aged parents. The lighting in the dining room has a bluish tinge to it, suggestive of the blues that the family is going through but doesn’t always speak of. The father and son joke about how the dinner from the "carrier meals" person has a papad, supposed to be crunchy, that can be torn like paper! The mother meanwhile presents a glum look, upset about the fact that the girl that her son, a widower of five years, was interested in has disappeared without a trace. The son places his hands around his mother lovingly and says that it is her health that is of utmost importance to him. The mother slowly turns towards him and says, "Romba Nalla Paiyyan Paa Nee…Unaku Innum Konjam Nalladhu Nadakalaam." The son, without saying a word, pats her gently on her shoulder, walks to the restroom, looks into the mirror and says to himself, "Irundhaalum Poren-nu Oru Vaarthai Chitra Sollitu Poirukalaam…Illiya Mr. Karthikeyan?"

Now, that was the moment when I realized that in movies, something could be restrained yet incredibly powerful. There is a concept in filmmaking called mise-en-scene, where different elements of a scene have to come together to create the right mood. This was a term that I learned in a film analysis class that I took in my sophomore year in 1999. It was a year-and-a-half later when I watched this scene from that quiet, touching tale of love and loss that "Rhythm" is, that I experienced it. I had become quite the movie buff by the late 90s. Kamal Hassan routinely took me on sojourns into worlds that he created with his splendid acting. But Vasanth, as I realized with "Rhythm," was one that brought his worlds to me. The scene I've tried to describe above was the moment where I started to believe in realistic storytelling. As I've learned by watching movies over the years, presenting a slice of life is a lot more difficult than entertaining the audience. Mainly because our filmmakers either feel the need to spoon feed emotions so that we "get" them or find the urge to make "commercial" compromises too hard to resist.

I digress a little. This is about how Director Vasanth has "inspired" me. No, wait – I didn’t digress. Making me think about realistic cinema is inspiration in itself. Appreciation of an art form is an art in itself. Talk to Vasanth for a few minutes and you will see an erudite film critic lurking inside. I once had a conversation with him about "Kudaikkull Mazhai" that was as entertaining as a conversation about a movie can be. It helped that he thought it was trash and I thought it was a classic! So, how did I get to know the Director well?

Let's go back one more time to that scene. So, having been stunned by the power of such a quiet, beautiful moment, I watched the rest of the movie. And, I knew that I had watched something special. It stayed with me for quite sometime. I had watched the Director's earlier efforts and I knew about his checkered track record. While "Keladi Kanmani" "Aasai" and the first "Paadhi" (!) of "Nee Paadhi Naan Paadhi" impressed me a lot, "Rhythm" to me was something more. Serendipity, in the form of my Aunt Rekha, struck the next time I was in India in 2002. I happened to recollect a conversation with her wherein she'd mentioned visiting the sets of "Aasai." So, I asked if she could introduce me to Vasanth. She was kind enough to request her husband, my Uncle Hari, to do so. He then scheduled for us to meet Vasanth at the now defunct Drive-In. In my first meeting with Vasanth, what struck me was how the way he spoke was so close to the dialogues he wrote! I spoke to him about my love for "Rhythm" and at the end of the meeting, we had another one lined up…for the next day. He requested me to write about 10 movies that I had particularly enjoyed and to give it to him at our next meeting. So, I dutifully worked on my "assignment" and at the next meeting, I opened up a little more. I told him about the things in his films that I didn’t like because I felt he should know my honest responses. But to tell a Director that you don’t like a film of his is like telling a parent that you don’t think his or her baby is cute. But nevertheless, I think he appreciated my honesty, for I have had the pleasure of his friendship for nine years now.

There are two things that I have learned from him – dedication and resilience. He is a Director who absolutely loves his craft. An uncompromising auteur, his films are a study in the auteur theory that a film's Director should get the lion's share of the criticism, positive or negative. Study his films closely and you will see that pretty much all of the praise or the blame can be laid at his feet. If "Rhythm" boasted of a slew of lovely moments that moved the viewer, his screenplay for the concluding portions of "Ey! Nee Romba Azhagaa Irukkey" was the primary reason for its lackluster response. I say this to emphasize the fact that all his films bear the stamp of his vision. And to do so requires an uncompromising quest for perfection and unwavering dedication to one's vision, both of which Vasanth possesses aplenty.

Also, if you read the reviews of his films, you will find several mentions of impressive performances – even "Nee Paathi Naan Paathi," a critical and commercial failure, fetched Gowthami an award. But dig deeper, you will find that it is thanks to some exceptional characterizations that the actors have gotten the laurels that came their way. Prakash Raj's star turn in "Aasai" and Padmapriya's sensitive portrayal in "Sathum Podaathey" come to mind. It goes to show that the creator infuses life into his creations and trusts the audiences to respond without coming in their way.

I have written about how Vasanth has made me respect and cherish realistic cinema through his own dedication. I also mentioned resilience - having known him personally for the best part of a decade and having listened to the hardships that he had endured to bring his films to screen – at least four of his films dragged their feet for more than a year in their making due to financial or other obstacles – it has been motivational for me whenever something happens that makes me think, "Oh, that’s just unfair." He has met with critical successes, commercial failures and aborted projects and yet with steely nerves, he has bounced back time and again. The sine wave that he has gone through since "Keladi Kanmani" (released in 1990) could be the subject of a case study on resilience.

Vasanth will continue to make movies, some of which may become classics. Others might not. But I will always have "Rhythm."
Posted by Ram Murali at 6:14 AM 4 comments: