Scaling a new peak: An essay on Sathyaraj’s performance as Periyar 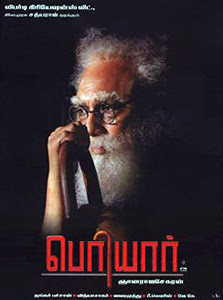 My Twitter timeline was inundated recently with messages on the birth anniversary of Periyar, who was born on 17th September 1879.  The movie buff that I am, I was instantly reminded of the astounding performance that Sathyaraj had turned in, in the titular role of Periyar (2007).  More specifically, I remembered this moment where Periyar’s friend Rajaji visits him in Erode.  The way Sathyaraj hugs him and offers him a seat while standing himself, was an image that was stuck in my mind.  I found a youtube video of the film and went straight to that scene.  It is not an especially dramatic scene.  Revisiting it, I realized why that particular scene had been affixed to my memory cells.  It was Sathyaraj’s body language and dialogue delivery.  In this piece, I hope to shed light on his body language, which rarely gets the kind of space that is dedicated to his diction and dialogue delivery.

Yes, Sathyaraj and Periyar share similar physiognomy.  But Sathyaraj, in real life, does not even sound remotely like Periyar.  The accent, the style of speaking, the gruffness (in Periyar’s voice, lacking in the actor) are all completely different between the activist and the actor.  That is why Sathyaraj’s transformation is especially praiseworthy.  There was a scene in Amaidhi Padai where he mimics a range of public figures like Karunanidhi, MGR, Sivaji and…Periyar.  That, I suppose, should have given us a glimpse of what the actor might do in the role of Periyar.  But a throwaway mimicry scene is one thing.  A complete embodiment of a character is another challenge altogether.  And Sathyaraj truly rises to the occasion in Periyar.

In this scene with Rajaji, the way he says, “Sandhosamunga…romba sandhosamunga…” is incredibly lifelike.  Also, the use of his hands while making his point to Rajaji is a superb demonstration of body language.  The ageing man holds onto his stick with one hand and gesticulates just the right amount when speaking of the politicians’ self-serving tendencies and the swiftness with which they switch allegiance.  Hand movements need to be purposeful and must accentuate the lines being delivered without serving as a distraction.  That is exactly what Sathyaraj does here.

There is another well-written scene where K Veeramani (a miscast Vijay Adhiraj) runs a proposal by him around self-respect marriage.  Periyar notices the phrase “and tying of the thaali.”  And he requests Veeramani to correct it to say, “or” so that the thaali does not become a mandatory requirement of a self-respect marriage.  Sathyaraj leans in, in the manner of elderly people who do so to listen with intent and hear things audibly.  He proceeds to make the corrections while using his hands to help signal the difference between the draft text versus what he is proposing.  In this and several other sequences, Sathyaraj evokes the body language of an elderly man in a very unfussy manner.  The drooping shoulders, the trembling hands, the tentative gait (with the aid of the stick) are all nuanced, never once calling undue attention to itself.

A word on the initial portions of the film.  Sathyaraj was 53 when the film was made.  So, it must not have been easy to evoke the younger version of Periyar.  This is where Sathyaraj brings in his years of experience.  Ignoring the fact that he looked older than the age of the character (in the first half), he uses his voice sans gruffness, to evoke the vim and vigor of Periyar’s younger days.  He is especially impressive in the scene where he transforms into the khaadhi attire.  The proud walk brings to life a man who is comfortable in his new avatar.  My only grouse is that Sathyaraj’s accent and dialect for the early portions are inconsistent with the dialect he speaks later in the film.

Sathyaraj, in real life, is a man of strong views and an unwavering belief in rational thought.  His long association with his friend and comrade Manivannan, who was a fount of knowledge on rationalism, solidified his value system over the years.  Whenever Sathyaraj had a chance to express political views or rational thought on screen in films such as Paalaivana RojakkaL, Vedham Pudhidhu, Amaidhi Padai or Puratchikaaran, one could sense that extra energy in the performance, an edge, a conviction in the lines he was speaking.  And Periyar, in that respect, is Sathyaraj’s apogee as a rational thinking actor.  It is a testament to his skill that he doesn’t rely on just personal convictions and physical similarities.  And that he actually turns in a 'performance' that reflects the myriad emotions that the character goes through.

Periyar, as a film, may have flaws.  It is more a hagiography than a balanced biography.  The acting, other than Sathyaraj and Khushboo, rarely rises above the level of a low-budget period drama.  Even Vidyasagar is not really in form, be it with the songs or the background score.  Yet the film is an important chronicle of a very important, even if polarizing, personality.  And a lion’s share of the accolades should be laid at the feet of the tall actor who turns in a towering performance.  And as a diehard fan of the actor, I will simply exclaim, “Sandhosamunga…romba sandhosamunga!"

Urvashi has made a career out of stealing movies from right under the nose of her co-stars.  Khushboo once recounted her experience working in Vanaja Girija.  The film’s title referred to a pair of sisters played by Khushboo and Mohini.  Urvashi did not even feature as a ‘lead’ per se.  She makes her entry only mid-way into the film as a bumbling maid servant.  But Khushboo mentioned, with grace and admiration, that Urvashi had completely stolen the scene(s) with her impeccable comic timing.  If that is the case for a film where she makes an extended appearance in the second half, then imagine her impact in a film where she plays the role around which the plot pivots.  That is exactly the case with Irattai Roja.  But as resplendent as she was, she still deserves a lot more spotlight for her spectacular performance than what she has gotten in the 25 years since the film released.

This film is a remake of a Telugu film, unseen by me.  But I can bet my Netflix subscription that the actress who played the same role would have not done as much justice to it as Urvashi did.  Urvashi sunk her teeth into the tricky yet juicy role with aplomb.  She plays the character of a wife who agrees to a ‘deal’ with another woman (Khushboo, who is excellent, but is pitted against a great actress at the peak of her powers).  The proposal which she agrees to is to have her husband (Ramki) marry Khushboo in exchange for Rs. 1 crore.  In the hands of an ineffective actor, this role could have turned into a shrill, repulsive, one-note caricature.  But Urvashi plays it just right.

That Urvashi has astounding comic timing is undeniable.  There are so many scenes where she has us in splits, most notably the ‘jodi porutham’ scene with Visu.  She is hilarious, as she mispronounces “Prime Sports” as “Brain Spot” and proudly talks about going to Nasik to see freshly minted currency!  The way she grabs the mic and launches into a tirade is especially rib-tickling.  As entertaining as her performance is in several such sequences, that is not what sets her apart.  It is the ability to switch gears in a matter of seconds.  Tonal shift is something elusive for lesser actors.  Whereas Urvashi is a master at it.  A case in point is the birthday party sequence which starts off lightly.  But as she watches her kid feed the piece of cake to Khushboo, she loses her cool.  Ramki rubs it in further as she continues to lose face in front of the crowd.  She switches from comedy to drama effortlessly.  Such is her likeability and the expert shaping of her character that we feel bad for her instead of treating it as well-deserved comeuppance.

Another example of expert juggling of tone is the rather serious scene where Urvashi realizes her folly and tries to renege on the 'deal' that she had struck with Khushboo.  This scene has several sharp lines delivered by Urvashi.  But it is rather remarkable that a big laugh comes across as completely organic.  It is the part where Urvashi asks her Dad (Vennira Adai Moorthy, who is superb) for advice.  In this case, Urvashi remains in character while we find it impossible to not laugh at Moorthy’s reaction.  It takes an actress of Urvashi’s caliber to know when to push which buttons in service of a scene, while neither sacrificing the essence of the sequence nor losing the opportunity for a laugh to lighten the moment.

The movie’s dialogues were written by the late N Prasannakumar, who wrote several of Vivekh’s tracks such as Run and Manadhai Thirudi Vittai.  Urvashi once mentioned (in the context of Vanaja Girija, also written by Prasannakumar) that she would take the time to collaborate with the script writer.  I don’t know much about the making of Irattai Roja.  But the fruits of the actor-writer collaboration are there to see on screen.  In addition to the big moments, be it comic or dramatic, there are several casually tossed-off lines that showcase the efforts of a writer who leaves no stone unturned even in the little moments.  For instance, the way the film ends.  When surprised by a friend of hers, she spontaneously shifts to broken English, only to revert to normalcy in a jiffy.  Prasannakumar’s contributions to such scenes are sadly forgotten.  Writers who work well with actors and directors need to be nurtured and encouraged so that they don’t end up as footnotes or entirely edited out altogether from analyses of film.

Urvashi’s ample talents have been provided fodder by filmmakers who understand her full range of capabilities.  I was especially pleased to see her in a deeply affecting role in the recent Soorarai Poattru.  Filmmakers and writers will do well to continue to tap into her acting chops.  Of course, there is always danger of her walking away with all the honors.  If you don’t trust me, ask Khushboo!