From time to time, I revisit at least bits and pieces of films that resulted from the legendary combination of Kamal Hassan and Crazy Mohan.  Tamil Cinema has had its share of immensely symbiotic pairings of actors with writers or directors such as Karunanidhi – Sivaji Ganesan, Manivannan – Sathyaraj and, most recently, Vetri Maaran and Dhanush.  In that pantheon lies, without a doubt, the partnership of Kamal Hassan with Crazy Mohan.  Just counting the credited ventures, starting with Aboorva SahodharargaL until Vasool Raja, they had a 15-year period where they were at the peak of their powers, individually and combined. (I am ignoring the fact that Kamal played a cameo in Mohan’s big-screen debut, Poikaal Kuthirai.) Helmed by Balu Mahendra, a filmmaker with his own stamp, the team weaves a tale that earns all its hearty laughs with elegant, healthy, intelligent humor.  That it also has emotional moments that work supremely well is a reason I chose to revisit this movie.

Sathi Leelavathi is the tale of a happy family that is torn apart by a man’s infidelity.  The couple in question are Ramesh Aravind and Kalpana.  Heera plays the other woman in Aravind’s life.  Kamal Hassan is his friend who catches him at an inopportune time, yet struggles to balance his loyalty to his friend and his respect for and responsibility towards his friend’s wife.  If you read that synopsis with no knowledge of this film, you will be forgiven for wondering where exactly the ‘comedy’ in all this is, given the seriousness of the plot.  Tone is something is that is difficult to achieve when a film tries to make shifts from serious to comedy or vice versa.  But Sathi… manages to achieve a superb balance throughout, expertly juggling different tones, never a shift coming across as jarring.  The restaurant scene with Kamal and Heera is a case in point.  Kamal makes some thoughtful observations about the complications and implications of an extramarital affair.  But the laughs are there too, especially with how he has a cheat sheet on his lap for reference!

Another reason Sathi… is a rarity in Tamil cinema is that it is a true ensemble drama.  There has been the odd Mudhal Vasantham or Aaha.  But it is creditable that even with stars like Kamal in the mix, all of the main cast get opportunities to shine in the serious and comic moments.  Ramesh Aravind, Kalpana, Heera all have their moments.  Chokalinga Bagavathar has a couple of rib-tickling moments too, his comparison of an underwear (“wear and tear”) and a loin cloth (“tear and wear!”) vying for the second funniest line in the film.  But it is the pairing of Kamal Hassan and Kovai Sarala that is sheer comic gold.  Speaking a flawless kongu dialect, the two of them are an unlikely pairing – full credit to Kamal for making a case for her casting despite Balu Mahendra’s initial, vehement objection.  But they make it work and how!  Right from the “Marugo marugo” song to the rip-roaring climax, the two of them share crackling chemistry.  They have some of the best lines in the film.  Sample this – when Kamal says to her, “Brake pudikala” she shoots back, “Ennaye pudikala…brake pudikala-na yenna poachu!”  They also bring to life a couple that shares an easy chemistry, with moments such as Sarala grabbing Kamal’s glasses to prevent him from fidgeting with it.

While Kamal and Sarala hog the honors for the comic portions of the movie, Kalpana is the anchor that ensures that the emotional moments are on solid ground.  She is magnificent in the scene where she asks Ramesh Aravind an array of tough but fair questions.  She is equally adept in the enormously entertaining scene in Kamal’s house where she orchestrates the slightly chaotic climax.  Did I tell you that the Thatha’s line took second place for the line of the film?  That’s because the funniest exchange belongs to Kalpana and Kamal:

That is the master of puns Mohan in his element, aided ably by the actors delivering the lines!  (It is sad that neither Mohan nor Kalpana is alive, both going way too early.)

There may be other films in the Kamal Hassan – Crazy Mohan combination that might be loaded with bigger laughs.  But Sathi Leelavathi is an undisputed comedy classic that makes us feel for its characters too.  That is because this film is not just full of laughs but is also full of heart.

A seismic event in tennis is about to happen this week. I am exaggerating of course, but when Roger Federer is primed to step on the tennis court again after being away for what seems an eternity, hyperbole to some degree is justified, perhaps even warranted. It is no accident that Federer’s much anticipated return to tennis coincides with the return of good weather. You could not ask for a better metaphor than flowers and sunshine, considering we just endured several months of the most horrendous global health crisis in living memory, not to mention the brutal winter that followed. It is prophetic that the year when an unyielding pandemic forced all of humanity to take an indefinite timeout from life and living was also the year that forced Federer to step away from the game he loves so very much. 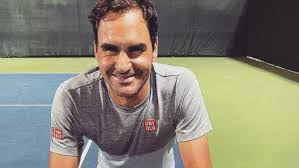 The question now on everyone’s mind is whether Federer’s tennis will return to Spring mode, with all of his fantasmagorical shot-making brilliance and balletic movement intact. His adoring fans will want nothing less of course, and the more optimistic ones among them might even hope they will see a new and improved version of the old Federer. What better way after all for the crafty magician with the racket to have whiled away his free time retooling his considerable arsenal and adding a glorious twist or two to his game.

Far fetched? Perhaps. Improbable? More likely. Impossible? The jury is still out on that one knowing that at least destiny if not age was firmly on Federer’s side not too long ago. While his detractors might scoff at the very idea that he will simply waltz back into his winning ways, Federer’s remarkable resurgence in 2017 — when he returned from a four-month hiatus and won the Australian Open title in a classic come-from-behind fifth-set victory against his legendary Spanish nemesis Rafael Nadal — is a stark reminder of why he remains the game’s favorite dark horse, even at age 39 (and counting). For Federer age is but a number, and when he steps on the tennis court this week in Doha, his first foray into competition in thirteen months, all bets are off. He still plays to win.

But nothing in all of sport is a sure thing, and even for Federer deja vu is anything but a sure thing. Competition in the men’s game has become a lot tougher in the last few years and a rusty Federer will have to deal with the Old as well as the New. The Spanish Bull and that Serb Machine Novak Djokovic (I use the monikers in appreciation) took the last two grand slam titles, so the Old is not only going strong, it is encroaching into Federer’s once exclusive domain. The indefatigable Spaniard is now on par with Federer on the grand slam titles count, while the relentless Serb is lurking two titles behind and has just taken the lead on the coveted total-weeks-at-number-one sweepstakes. Meanwhile the Young and Restless — there are too many of them to count — are huffing and puffing and closing in rapidly. One of them won the year-end contest last November in emphatic fashion and there is surefire optimism that the days of the old guard are numbered.

What comes out loud and clear from all of this is that the old Federer, however great or godly he appears, might not find it easy anymore to get past the first week in the majors, let alone win the big trophy. The year 2021 is not 2017, age 39 is not 35, and history will not always be so kind as to repeat itself. Which is why that retooling idea is gaining traction in Federer’s fandom…for therein lies their hope and his salvation. Remember the aptly named SABR (Sneak Attack by Roger) which Federer conjured up a few years ago to alarm, rattle and unsettle opponents? Word on the tour is that Federer hasn’t been twiddling his thumbs during the long break, that he has in fact added a few more trademark Federesque moves to shorten the rallies, gain the advantage, and maybe, just maybe, finally convert some of those darn match points. Will that prove to be the proverbial clincher for a guy who has earned and squandered more break and match point opportunities especially on the big stage than any other player in history (including two which literally cost him his ninth Wimbledon title in 2019)? For Federer fans, hope is eternal, and their faith in his ability to garner more glory is deep. That said, if things still don’t pan out on the tennis court and there is no last hurrah on the horizon, no worries. The ultimate thrill of tennis for the Roger Federer fan is just watching him play.

One final thing…2021 could be the year when the GOAT (Greatest of All Time) debate takes center stage with each of the Big Three laying compelling claim for the top honor. The Spaniard and the Serb will take the conventional wisdom route and rest their case on uniformly accepted relative measures — number of grand slam titles, weeks-at-number-one, head-to-head competition and so on. But for the imperial Swiss numbers tell only half the story. How he plays the game is the rest of the story. He has his very own meticulously cultivated yardstick wherein greatness is measured in absolute terms. William Skidelsky in his book Federer and Me makes the startling point that “there is nothing old school, nothing pre-graphite” about Nadal and Djokovic, where as the Swiss’ appeal is both a throw-back and a catch-all, a perfect amalgam of the past, present and future that evokes wonder and leaves giddy fans asking for more. “One way to think of Federer is as a palimpsest,” writes Skidelsky, “a text on which the various stages of tennis’ development have been successfully inscribed.”

The GOAT debate will linger on forever, which is not a bad thing for us mere mortals. For now however we should leave philosophical and arbitrary arguments aside and focus on the tennis that will be served up this year. The terrible pandemic will soon be relegated to the rear-view mirror, touch wood. Spring is almost here — with the birds and the bees and the flowers — to remind us to replace fear with faith. Rafael Nadal and Novak Djokovic are all set to resume their dogged single-minded pursuit of GOAT-hood, while an army of young tennis hopefuls — from Theim to Medvedev to Kyrgios and Rublev — are salivating at the gateway, eager and ready to uproot an established old order. And last but not least, Roger Federer is back…to play tennis and enthrall us as only he can.