Thoughts and memories about Aaha, a comedy drama directed by Suresh Krissna, that was released on Oct 30, 1997.  These are not listed in any particular order.  At the end of the write-up, I have embedded the youtube video of the movie, marking the scenes that I have referenced.
Happy Birthday, Aaha!  You are one of a kind!  Movies like you are hard to find!


Time points for the scenes (in the video link below):

In Pursuit of Meaning

470 milliliters.  That was the quantity of blood drawn from my body during a drive conducted at the local church.

3 liters.  That was the amount of blood that my Aunt lost in the days leading up to her death this time last year.

As the days of the calendar trudged through the end of September, several disconnected thoughts traipsed through my mind.  I wanted to do something ‘meaningful’ on her death anniversary.  Donating blood in the honor of someone dear who had died of hematologic complications – that was, to me, a token of remembrance that would have made her smile.  But after my blood was drawn and the bandage was applied, I asked myself whether I had done enough.  The more complicated question was, how exactly would I define ‘enough?’

I work in the oncology group of a pharmaceutical company.  I have seen videos of metastatic patients – in layman’s terms, patients whose cancer has spread to different parts of their body.  I have wondered if these patients tried to encapsulate their entire lives’ memories, regrets and wishes all into a show reel.  Do they, especially the ones that are on the younger side, experience a sense of desperation?  How do they see their tradeoffs -- work in favor of family or family in favor of friends?  These decisions that they had perceived as the ingredients of a balanced life – do these choices, in retrospect, seem to have resulted in pyrrhic victories?  Or, do they have a satisfied sigh that they had balanced, with the grace of a ballet dancer and the skill of a tightrope walker, the components of their core?  That they had dealt with the surprises of life with equanimity that prepared them for their toughest physical and psychological battle.

Apart from truly old people at the end of their lives, I don’t think many, with the exception of terminally ill patients, would have the ‘luxury’ of an extended introspection, with the finiteness of their lives an immediate reality, not a fact of life.  By the same token, it is these patients that face a tough battle if they start taking sojourns in the dark recesses of their mind.  If they start assessing their life as one that has not been well-lived, it would be akin to an architect looking at his magnum opus and wanting to demolish it in a day and build it from scratch in a week.

The four people whose photographs are a part of my prayer room are my maternal and paternal grandfathers, my grandpa’s brother and my Aunt.  One was 84 and died while in good health, with minimal suffering.  One was 67 when he stepped out of his house, experienced a massive cardiac arrest.  One was 61 when he was involved in a freak car accident, while living for less than an hour in the realization that his end was nigh.  And my Aunt was 49 and was unconscious in the hospital for a week before passing away.  She probably did not know that she, despite her health complications, was going to leave this world.  None of these people had the experience of a patient with a terminal condition who knew roughly how long their final lap was.  But I am certain that all four of them passed away with barely any regrets.  Their lives, some short, others longer, were well lived and they were well loved.  It was because they loved well.  Their love for their family and friends was as unconditional as it was comforting.  They had the grace to acknowledge their foibles, took life seriously but not so seriously that they did not have their share of laughs.  Their innate generosity meant that they gave more than they took.  In essence, in their own authentic ways, they had done enough by the time fate intervened and decided that their time was up.

I suppose I have my answer there.  Donating blood in my Aunt’s memory is not going to be ‘enough’ per se.  But it is the equivalent of a brick, not an architectural marvel.  It is a series of these little bricks that will help me construct a sturdy monument, a structure that despite when my end comes, be it 49 or 84, is a creation that I would look at with a sense of accomplishment.  In essence, the pursuit of meaning is rendered redundant when the journey is comprised of bits of the actual goal. 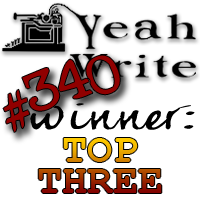 10/20/17 Update -- I came in second in this week's popular vote.  There was no editor's pick but I was happy to be cited in the week's round-up.  See excerpt below as well as the link:

“One way to keep the reader’s attention is to have a strong central theme, object, or phrase to tie your essay to. If you can signal this theme in your title, it’s even better – like the repetition of sounds and letters in this poem, it will create moments that stick in your reader’s head without you having to be obvious about HEY THIS IS MY THEME WORD. Ram did it this week with numbers, but you can use whatever works for your idea.”