Once upon a time, there was an actress named Saritha

More than one review of the recently released “Kabali” mentioned the age gap between Rajnikanth and his lead pair Radhika Apte and that the latter looked just way too young to be the Super Star’s wife.  Beside these reviews were interviews with director Ranjith who mentioned the Rajni from “Mullum Malarum” (1978) as a character that he admired a lot.  That set me thinking of the actresses that acted with Rajni in the early phase of his career.  It was like a telephone directory on the S page - Srividya, Shoba, Sripriya, Sridevi, Saritha.  That last name – Saritha.

My mind refused to go past Saritha.  Two specific moments kept popping up in my mind for the next few minutes.  The first was a scene from the unforgettable “Agni Saatchi” where she played a troubled wife with a horrific past.  There was a scene where she confronts Rajnikanth (playing himself, in a cameo) in his house after watching the movie ‘AvargaL’ (where Rajni played a sadistic husband) in a theatre.  Her performance in that scene was symptomatic of a lot of what made Saritha a standout actress.  Firstly, she could play a dramatic scene with complete conviction, without seeming theatrical.  Secondly, she was not only endowed with large, powerful eyes but knew exactly how to use them.  And finally, she was a master at playing mercurial characters.  Her expressive face and complete control of body language meant that she could play her roles at a pitch that was just perfect for the role.

The second moment that I could not manage to get off my mind was the scene in “Vedham Pudhidhu” where she welcomes an orphaned Brahmin kid into her house.  As the kid hesitates for a moment, she says, “Endha koviluku ponaalum ellaa saamiyum onnu theyn, endha veetuku ponaalum ellaa thaayum onnu theyn…vaa rasa.”  Now, if you’ve seen “Vedham Pudhidhu,” you will know that this line is uttered by a Mother who lost her son in the same unfortunate accident in which the kid lost his father.  The emotion that Saritha imbues into that line is reason enough to watch the movie again.

These two movies – “Agni Saatchi” and “Vedham Pudhidhu” – to me were the highlights of her career that was shaped to a large extent by K Balachander.  He gave her a plethora of roles that gave a new dimension to the word ‘author backed.’ KB, the author and auteur he was, knew how to back the actor who, to her full credit, knew how to effectively project the writer’s thoughts and even present some of KB’s eccentricities on screen in ways that seemed completely beyond the grasp of some other heroines of KB’s (except maybe Suhasini).  “Thappu ThaaLangal,” “Nool Veli,” “Thaneer Thaneer” and “Achamillai Achamillai” all featured Saritha at the peak of her powers.  Even in a much lesser effort such as “Kalyana AgathigaL,” Saritha could still do full justice to what was quite a sketchily developed character.

But the bigger question that I asked myself as I recounted memories of Saritha’s wonderful performances was whether Tamil cinema can get out of the (mostly male) star dominated cinema that can very rarely carve space for heroines like Saritha who oozed talent, not glamour, who was the pivot around which a movie revolved, not just a cog in a star-studded wheel.  I hope that with talented performers like Aishwarya Rajesh (“Kaaka Muttai”) that writers and directors in Tamil cinema – and more importantly, audiences – will warm up to tales that go deeper into the female psyche and project the pains and pleasures of women in an authentic manner.  The recently released “Iraivi” and “Oru NaaL Koothu” give me hope.  If only actresses in the Saritha mould are allowed to be relevant for a longer time, we can then stop worrying about male stars being paired with heroines half their age!
***
The “AvargaL” scene:

The “Vedham Pudhidhu” moment -- Start watching at 1:20:55 (for the scene that I had mentioned in the third paragraph)

Please, let us not forget about "Iraivi"

When I started thinking about this write-up, I questioned myself on its value.  After all, “Iraivi” is probably out of the theatres by now.  (I watched it legally on HeroTalkies.)  And, I don’t even think it got the kind of rich, unanimous accolades it deserved on the critical front.  So, is this a case of too little, too late?  Probably.  But wait.  That doesn’t really matter, does it?  After all, a movie-going experience is unique for every individual that watches it.  Certain films ‘speak’ to us the way it may not have to others.  And, that is fine, I suppose.  The fact is, “Iraivi” made a TREMENDOUS impact on me.  That’s TREMENDOUS- bold, italicized and underlined.  (Is there another way to emphasize?!)  Let me tell you how and why. 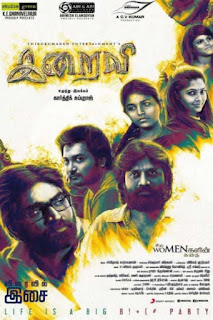 “Iraivi” is the story of three (or rather, four, if you count the small but beautifully etched role of Radha Ravi) men with differing shades of grey and whose impulsiveness, self-absorption and hot headedness wreaks havoc in the lives of the women that care for them.  The director is Karthik Subburaj whose previous works “Pizza” and “Jigarthanda” were smartly written tales with an emphasis on the surprise factor and the desire to inspire our awe but not necessarily strike an emotional chord.  But with “Iraivi,” he completely surprised me, not with a twist necessarily.  But with his ability to be stunningly honest in his characterizations and the dialogues.  Dialogues of incredible depth of emotion, delivered by actors in whom we never knew such shades and nuances existed.  (More on that in a bit.)  There is a scene where a husband asks a wife a question about her fidelity.  The way this scene plays out, the emotions that are on play and the quick lifelike change of tone from playfulness to a dead serious interaction...this is the kind of ‘twist’ that you see in the little scenes and moments in this movie.  If there was a thing called ‘emotional twist’ and not a ‘plot twist,’ this movie is full of them.  And, in those moments of unpredictability, Subburaj creates a gnawing sensation because sequence after brilliant sequence, we are hit with things that are not only unpredictable (mostly) but also seemingly spontaneous.  And, all of this in the make believe world of cinema where we know that it is the most difficult task to make us think that the happenings are based on spur of the moment decisions of certain impetuous fools (these characters, that is) and not the result of thoughtful writing, stunning craft that’s evident in the mood-enhancing cinematography (like the unforgettable rain sequence at the end; cinematography by Sivakumar Vijayan) and the splendid acting.

Talking of performances, this is an ensemble piece in the truest sense of the word.  Everyone from SJ Suryah, Vijay Sethupathi, Anjali, Pooja Devariya to the smaller characters like Radha Ravi and Cheenu Mohan (from the ‘Crazy’ Mohan troupe of the 80s and 90s, effortlessly essaying a serious part here) are spectacular.  Everyone has at least a moment or a scene where they move us deeply.  Anjali’s ‘Enaku Malar matter theriyadhu-nu nenachiya?’ and SJ Suryah’s phone conversation in the climax take the cake and the toppings when it comes to moments that stayed with me long after the movie ended.

When a movie like “Iraivi” comes along, there is another reason why I feel so proud of thamizh cinema.  And, that is the blending of form and content.  Being a huge fan of the writings of Baradwaj Rangan, I have come to appreciate the need to go beyond just the written material and employ cinematic tropes to create an ‘experience’ where we walk away thinking about the content and admiring the form.  “Iraivi” is one such experience.  It is impossible to watch this movie and not think of the people in our lives and question our choices and attitudes towards our loved ones.  And, right from the title, this is a movie that shows incredible respect, love and admiration for its female characters.  In this day and age where we talk of the ill effects of having a callous attitude towards stalking, to have a movie that raises uncomfortable questions of men and their attitudes towards women is an achievement in itself.  And talking of the 'form' aspect, there is nothing in the music or the cinematography that distracted me or called attention to itself per se.  But upon reflecting on the movie, I could truly see how the background music in the more tense scenes and the lovely framing of the scenes such as the Anjali-Vijay Sethupathi confrontation with  the most appropriate of close-ups on actors who could do justice to them, added value to this journey that Subburaj takes us on.

So, what is my hope?  I don’t know.  I suppose that I really hope that this movie doesn’t get completely forgotten amidst the plethora of releases that we get hit with every week and the fervor with which audiences lap up horror flicks and star-driven vehicles.  Amidst those star-driven vehicles, I am glad that I took this 'director-driven' journey, which was a roller coaster ride of emotions.  While I wish more people had hopped on to this ride, I am just glad that I had an experience that I will cherish as a die-hard movie fan.  And for that, let me doff my hat to Karthik Subburaj and the “Iraivi” team.
Posted by Ram Murali at 11:24 AM 9 comments: