A dance, a trance, a memory: An essay on Lakshmy Ramakrishnan’s “House Owner”

It is raining cats, dogs and snakes outside.  An elderly couple breaks into an impromptu dance in their kitchen.  This sequence is intercut with a dance performed by the same couple at a much earlier phase in their life.  There is an adorable moment when the elderly lady can’t quite hold a pose.  But she tries gamely.  She is in a state of bliss amidst the seemingly huge imperfection that has marked the couple’s present state – the husband, a retired army officer, is suffering from Alzheimer’s.  And then, he suddenly snaps out of the wondrous reverie.  He can’t recognize the lady as his wife.  What is still imprinted in his mind is the image of the much younger girl that he fell head-over-heels in love, even if the marriage itself was arranged.  In a fit of disgust, he throws a tantrum and some flour on the wife for good measure.  The wife loses her temper but only for a split-second.  She knows that it is not the husband’s fault.  Amidst the heartbreaking moment, she focuses on a practical detail – she has to change.  Life has to move on.  It is this kind of detailing that sets Lakshmy Ramakrishan’s “House Owner” apart.  The nuance not only brings the drama to life but also right next to us.

This couple – essayed by Sriranjini and ‘AadukaLam’ Kishore as the elderly pair and Lovelyn Chandrasekhar and ‘Pasanga’ Kishore as the younger version – becomes imprinted in our minds slowly but surely.  The wide-eyed wonder of the younger couple is a stark contrast to the world-weariness and exhaustion of the older pair.  This is never expressed in any dialogue.  Even the transitions between the past and present are done seamlessly, purposefully.  Seemingly incidental details like a non-existent snake in a pond assume gargantuan proportions later on.  Minutiae like the fear and apprehension of Lovelyn in the darkness and the subsequent role reversal as they age are just put out on the screen but never force-fed to us.  In that sense, Lakshmy Ramakrishnan trusts the audience to pay attention and to be patient – the details unravel gradually (as they should), not in a rush.

She reposes the trust of the audience manifold in the concluding portions, which play out like a thriller, one that makes our hearts ache, not race.  There was a point in the climax where I turned my eyes off the screen, for the tension was unbearable.  Without spoiling the movie for you, I will just say that the images and sounds are bound to haunt even the heartless viewer.

M Ghibran comes up with a background score that is just about the perfect complement for the images on screen.  And the images themselves?  The art direction (by the director herself with Captain Chandrasekar) and the cinematography by Krishna Sekhar are in sync in a way that would make the PC Sreeram – Thotta Tharani pair of the ‘80s proud.  If you think that that is hyperbole, then you haven’t watched the climax of this film closely.  The technical brilliance of the crew behind the screen is matched by the ability of the actors on screen.  Sriranjini is the prime reason the climax works so powerfully.  Lakshmy Ramakrishan’s voice work perfectly suits her– the Palakkad-accented Tamil is lovely to listen to.  (My favorite line – “Nelam ellam vallam!”; translation: the floor is full of water!)  Kishore (Senior), through his circumspect body language, essays the retired army officer role with much assurance.  His best performing moment comes in the aforementioned dance sequence.  The younger couple too strike an easy, likeable chemistry.  Kishore (Junior) nails the ‘ponnu paakara’ scene – the way he silently expresses joy with a suppressed smile seeing his wife-to-be is wonderfully done.  And Lovelyn is excellent in the party scene where she conveys awkwardness without overdoing it.

(Spoiler ahead) - I had an interesting conversation with a friend, who wished that the ending was positive, that the film could have ended with a ray of light, that could have offered hope to couples where one is suffering from Alzheimer’s.  Of course, the way a tale concludes is the prerogative of the writer.  What I took away from the movie was encapsulated in a scene featuring Lovelyn and Kishore.  The latter, having returned unscathed after serving in the army, mentions to her that given the uncertainties of his profession that it is his intent to enjoy every minute that life affords them.  It’s a beautifully written scene, one whose seriousness is punctured with a delightfully sweet response from the wife, who admires the English spoken by the husband than paying much attention to the content.  But as a viewer, I thought of this scene during my chat with my friend.  Life is sometimes shorter than we plan for it to be.  And it behooves us to savor every moment by loving our loved ones deeply.  This is stated explicitly nowhere in the film.  But the magic of the medium is such that the same film plays differently for different people.  As much as I felt a strange sense of upliftment during the bittersweet ending of the director’s previous effort, “Ammani” I was thankful (for the lack of a better term) for the poignancy evoked by this film’s conclusion.

I admired the director’s debut feature “Aarohanam” quite a bit.  I enjoyed only parts of her sophomore effort, “Nerungi Vaa…Muthamidathey.”  I was stunned by “Ammani,” which I reckon, is her best film yet – the “Seththathu Saalamma” line knocked a punch in my gut like few other movies have managed.  “House Owner”, her fourth effort, is a profoundly thought-provoking experience.  It doesn’t have the more instantly accessible pleasures of “Ammani” (like the irresistible “Mazhai Ingillaye…” song).  But it is a mature film that wants to go deep into the minds and hearts of the lead characters, and by extension the audience.  That it succeeds handsomely is a testament to the vision and conviction of the filmmaker.

The protagonist of “House Owner” may have suffered from Alzheimer’s.  But it will be nigh impossible to forget this movie.

Dear Men in Blue: An open letter to the Indian cricket team

My dear men in blue,

It has been a sheer pleasure ‘following’ you throughout this 2019 world cup.  Even though many of us could not be in England physically, our thoughts, prayers and emotions were with you every day and every minute in your journey.  I shall leave the more technical analyses of your performance to the cricket pundits.  I will, in this letter, just tell you what I took away from this experience.

What stands even taller than some of your run rates is the way you continually looked like one tightly-knit unit.  When MS Dhoni dove to his right to take a sharp catch, Yuzvendra Chahal bowed to him in a gesture that at once suggested respect and unfettered joy at an ageing master throwing up a pleasant surprise.  I will remember Hardik Pandya winking at a teammate after scalping a wicket with his patented slow bouncer – the smile reached his eyes quicker than Jasprit Bumrah’s yorker usually reached the stumps.  Isn’t that a sign of genuineness?  Trust me when I say that those smiles were infectious. 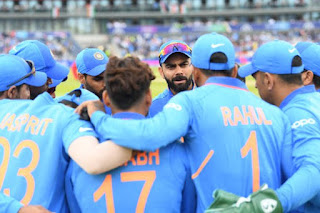 Every time a tough question or two was thrown at the captain leader Virat Kohli about a team mate’s purported error, what we heard was not apportioning of blame.  Instead, what he offered was a measured response that addressed the issue without attacking the person.  Excuses were not given for errors of judgment.  Rather, human fallibility was acknowledged as a part of professional sport in the most mature manner possible.  In short, this may be a relatively young side but as a team, you exhibited an enviable mix of youthful exuberance, energy, playfulness yet never losing focus on your goals as a team or missing an opportunity to be guided by the more senior players in the team.  When confidence mixes with humility, the resultant cocktail is not intoxicating in a trippy way but rather, invigorating in a balanced manner.

I was certainly worried when you lost the monstrously dangerous Shikhar Dhawan early on to injury.  But you somehow coped, managing replacements without being rigid.  You, of course, know that the middle order frailties will have to be addressed swiftly.  But I must say that up until today, the spectacular top order ensured that – this car analogy will make Dhoni happy, I hope! – you raced off the blocks with controlled acceleration, knowing when exactly to press the brakes so as to retain control.  Alas when the top order crashed into the brick walls erected by New Zealand’s nifty bowlers and fielders, the damage was nearly irreversible.

The fact that Ravindra Jadeja and Dhoni showed such indomitable spirit and fought until the very end is something that budding professionals like me will take to our own work lives.  As your friend Harsha Bhogle thoughtfully stated once, the trifecta of “ability, attitude and passion” are the key ingredients of success.  We weren’t successful today – I say “we” because feel like I should partake in failure as much as we derive surrogate happiness from your successes.  But the spirit, the intent and the willingness to try your best to succeed was a ‘success’ in itself.  Just that in the group phase, this spirit resulted in victories.  But today that was not to be.

I know that you must all be deeply disappointed that you will not be playing in the finals at Lord’s.  That is okay.  This is not the last tournament that will be staged by the ICC.  The “attitude” and “passion” that you all have aplenty will ensure that in due course that your “ability” will fetch commensurate results quicker than you think is feasible.  For now, please remember my idol Randy Pausch’s words – experience is what you get when you don’t get what you wanted.

Over the last few weeks, you have given us immense happiness by representing the nation the way you did.  It is time for us to meaningfully express gratitude and reciprocation by being there for you during this hour of sadness.  You have our unqualified support as you learn from this experience and continue to take Indian cricket to stratospheric heights.  May tomorrow be a brighter day.  For now, safe travels.  Rest up and recharge.  We will back with you before you know it.

With much love, gratitude and respect,
Yours cricketfully,
Ram Murali