A few weeks ago, I wrote an article on Visu’s films.  I had written pretty much all of what I wanted to about his style of filmmaking.  But the more I thought of some of his films, the stronger my urge was to get his perspectives on certain elements of his films.  And thanks to director Suresh Krissna, I was able to get his contact information.  After a few messages, I approached him for an interview on the phone.  In response, he requested me to send questions via Whatsapp since he could answer them during his downtime.  Within just two days of my sending him my thoughts and questions, I got a series of audio files neatly organized under my questions.  First things first - Thank you so much, Visu Sir, for your thoughtful, timely, candid and lucid answers.  Here’s wishing you the best of health and a wonderful 2018!

Note: The audio files sometimes take a minute to appear on the post (depending on your connection).  Also, if clicking on the play button doesn't launch the audio, click on the expand icon at the far right of the audio frame to open up the mp3 files in a different window.  Please drop me a note if you have any trouble playing the audios.

Playing the Protagonist vs. one of the Characters:

S. Ve. Sekhar, the humorist and the character actor:


Approaching a Theme from Different Angles:


Writing Scripts for Other Directors (Both Original Scripts and Remakes)

The Role of Music:

March 1, 1992.  Brisbane.  India versus Australia.  1992 World Cup.  Ardent Indian cricket fans from that era will never forget this game.  Due to the ill-conceived rain rule, India had three overs knocked off their chase for a reduction of only two runs from the target.  India had their back to the wall when Sanjay Manjrekar walked in at the fall of Kapil Dev’s wicket.  What followed was scarcely believable, even for his admirers, yours truly included.  Manjrekar looked like a man on a mission – he had this quiet intensity that I loved.  He toyed with the bowlers, especially big Merv Hughes, playing with a kind of controlled aggression that he displayed consistently between 1990 and 1992.  This 47 off 42 balls is arguably one of the great innings of his stop-start 74 ODI career. (He played 37 Tests.)  Neither his innings nor this match had a happy ending.  He was runout by a howitzer throw from Craig McDermott.  And India lost the game by one run. 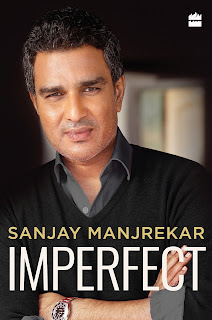 The context of this innings was in line with his career – he was rarely a part of a settled winning unit.  There was no doubt of his talent.  But owing to a failure to work out pragmatic, sustained solutions to his issues and an unwillingness to rise above or work around a myopic, uninspiring management, Manjrekar’s career was a case of ‘what could have been.’  But that is what makes his autobiography, quite aptly titled Imperfect, a riveting read.  It is an honest, authentic, introspective memoir of a man who was and is tough on himself.  The fringe benefit of reading this book is that it raises vital questions on the myriad types of sportsmen, and people in general, and the fears, insecurities and motivators that rarely are the same for two people.

The book is peppered with stories and anecdotes that are sometimes touching (the chapter on his father is actually quite gut-wrenching) and other times amusing – his account of Azharuddin-led team meetings will have even Azhar in splits!  But the best parts of this book are the ones shed light on his dark days as a player.  This is clearly the voice of a man that went through his share of struggles, not always emerging victorious.  I also regard this book as a cautionary tale.

Cautionary because it is absolutely essential for everyone in any walk of life, not just cricket, to take a look in the mirror to see if they have the wherewithal to deal with their struggles, be it technical or mental, and determine if there is a need to seek external support.  I am reminded of a lovely line from the movie, Burnt – “There is strength in needing others, not weakness.”  It requires courage and a willingness to step outside one’s comfort zone to seek advice and to act upon it.  As Manjrekar himself mentions on multiple occasions, not everyone has the steely resolve, unmatchable genius or even the single-minded focus of a Sachin Tendulkar.  It is deeply saddening to read about the sorry state of affairs of Indian cricket in the early 90s - the prima donna attitude of some of the seniors, the utter lack of communicative skills of their captain or the tactless insensitivity of a coach who yelled at a spinner for having had a bad game.  All of this is to say that Manjrekar did not have the most conducive environment or those selfless mentors to help him work out his issues with technique or confidence.

Manjrekar, with an endearing lack of self-pity, shares simple but revealing details without force-feeding them to the reader.  He is also disarmingly frank about his own mistakes, such as his arrogance following his heady days in Pakistan.  That he learned from the follies and was a more empathetic captain later is symptomatic of a man that was not inflexible.  He was just…imperfect.

Something else that leapt at me from between the lines was that Manjrekar came across as a man that did not seem to be able to relish his ‘wins’ enough.  An account of how he felt when he reached his first Test century (against West Indies in their home turf) was something that was conspicuous by its absence in the book.  Of course, the acts of omission and commission are the prerogative of the author.  But from my own life experiences, I have learned that during times of success, it is important for the mind to have enough fodder from the fruits of one’s labor for it to have the strength to deal with the tougher battles.  And from this book, I never knew if Manjrekar ever told himself enough that he had to build upon his successes, to take a quiet moment to maybe watch his own highlights to notice what he did do right.  It would not have been an exercise in vanity as much as it would have been something that fed his self-belief further and helped him exorcise any demons, be it of his tough childhood or his technique-related worries.  By the same token, he also is candid about how he could never emulate a Ravi Shastri who once decided to steadfastly cut out the cover drive to minimize his risk against Kapil Dev’s potent outswingers.  Grinding it out during tougher times should not be conflated with being so hard on yourself that you paralyze yourself and curtail your resurgence after a fall.

Irrespective of your opinion of Manjrekar the player or commentator, this book is a compelling read.  Manjrekar appears to be in a phase of his life where he is enjoying himself in his profession (as a commentator) with a kind of relaxed, detached attachment.  This attitude has helped him tell the story of his journey where the source of happiness was a destination, a goal, not the journey itself.  By looking back at the potholes, the slips and the accidents of his journey, he has granted himself a license for a smoother ride now.  That the book makes the reader evaluate or reevaluate their own path is a testament to the power of his writing and the clarity of his thinking.