An Appointment with Mr. Disappointment

My regrets, be it losing loved ones prematurely or missing something narrowly in academia, seem to be one of two kinds.  They are either completely uncontrollable or they seem to be mostly in my hands.  But I slot disappointments in neither of these two categories – I seem to associate the word mostly with expectations.  Of expectations missed by trusted ones…wittingly.

‘Wittingly’, because I have heard it from at least a few different people that I give my family and my family of friends a long rope.  I would like to believe that I put in sincere efforts in order for people to feel loved, cared for and secure.  I try to channel my father in this respect – he may not always remember people’s birthdays or anniversaries.  But his approach to every relationship is completely customized.  He would focus on the other person’s likes, needs, desires and leave no stone unturned in ensuring that they feel the warmth and security afforded by his affection.  In conversation, he would effortlessly slip in things about the other person’s childhood or remember something from a few decades prior that rarely found a place in anyone else’s memory cells.  Yet by sharing the scent of a memory, he would envelop the person in a fleeting, intangible yet wondrous mist of nostalgia.  If you were ever the recipient of that affection, you would know how special and privileged that feeling was.

To be regarded as a chip off the old block is an abiding desire of mine.  But I know that my own foundation has been rickety, not rock solid until recently.  Let’s examine the cracks in the chip.

I did have expectations of reciprocity.
I did want to feel that I was relevant.
I refused to accept that as a person’s circle expanded, that I may be pushed to the periphery.
I was proud…strike that…I was arrogant about the fact that I had painstakingly walked the extra miles out of my own volition.

Let me pause.  And let the wiser, more mature part of my brain take over.

So yes, I do have expectations of reciprocity.  But that is okay because I am aware of, respect and even cherish different forms of expression, even the tacit ones.  I’d rather expect reasonable reciprocity rather than try to act selfless and be resentful.

I have a need to feel relevant.  But I know that it is a vibe.  It is either there or it is not.  Relevance can be on shaky ground when people’s interests evolve over time.  But when the foundation of a relationship is genuine respect and regard (even if unstated) for the other person, their evolving areas of interest become automatically relevant to oneself.  Even when there is an innate lack of curiosity, to have some focus on and acknowledgement of the other’s persons likes is a surefire way of completing your half of the relevance piece. If the other half of the piece is empty, the dissonance is bound to be pronounced.

Yes, I refuse to accept a place in the periphery but I know that I am unaccepting of only those changes where I don’t see the beautiful yet ineffable core of a person anymore.  When that core is visible, the periphery seems a splendid vantage point to view the other person’s new world from.  When the core is invisible, the sight of the other person can get frustratingly hazy.

And finally, yes, I have a healthy dose of arrogance about my convictions.  But over time, I believe that a small acknowledgement of extra miles that I put in is what makes me put in those huge extra steps.  As some wise old soul said, acknowledgement is the first decisive step in the path of empathy.

For better or for worse, I have, in the recent past, distanced myself emotionally from the ones that have disappointed me.  As allusive as this write-up may be, it is a lament resulting from long ropes that got so lengthy that the other person is no longer visible to the naked eye.  As direct but courteous requests for continued relevance fell on deaf ears, I have had to mute my own internal wails that were, beyond a point, deafening.  For now, Mr. Disappointment is being kept at bay.  But not before I came face-to-face with him.  Love him or hate him, you can’t ignore the fact that he is a fantastic teacher! 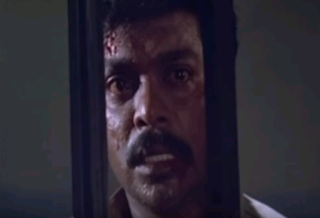 As an ardent fan of Parthiban the actor, one of my regrets is that he never had a director that tapped into his abundant potential the way a Mahendran worked with Rajnikanth or the manner in which the late Manivannan collaborated with Satyaraj.  With those duos, you could sense that they got the best out of each other.  Take the proposal scene in Johnny – have you ever seen Rajni cede space and play second fiddle to a female lead so wonderfully?  As spectacular as Sridevi was in the scene, the scene would have fizzled out had Rajni not played such an apt foil.  It was a side of Rajni that was never seen before and rarely seen afterwards.  Parthiban the writer-director has given us some unforgettable movies like the sensational Pudhiya Paadhai, the riveting Kathai Thiraikathai Vasanam Iyakkam or the poignant KudaikuL Mazhai.  But when directed by others, he has rarely been as effective.  Of course, he has given us enough performances as a lead that we know of his skill as an actor.  But it is in a small set of films like Bharathi Kannamma, Azhagi and Naanum Rowdy Thaan that we have seen directors give ample fodder to the talents of Parthiban.  Eclipsing all these films is Swarnamukhi.  Written and directed by KS Adhiyaman (who also gave us that forgotten gem Thotta Chinungi), the film features Parthiban at the peak of his powers.  He sinks his teeth into a role that is tailor made for him – actually, he stitched large parts of the fabric. (He is credited in the titles for his significant contribution to the script.)


Swarnamukhi is the story of the titular character (played by Devyani), the daughter of a devadasi.  Born out of wedlock to her mother (Fathima Babu) and biological father (Manivannan), she dedicates herself to bharatanatyam.  Her mother steadfastly refuses to toe her father’s line and ensures that the fate that felled her does not befell her daughter.  Into Swarna’s life enter two men – Pandian (Parthiban) and Aakash (Prakash Raj) - at vastly different points.  But when the two men face off with one another, an absorbing triangle ensues.  But unlike the typical love triangle where one of the suitors is reduced to a cartoon, the men vying for the same lady love are equally good in their own ways yet equally crazy about the girl.


Prakash Raj and Devyani have their moments in Swarnamukhi.  But if they were to honestly introspect on this film, they would be the first two people to admit that it is Parthiban that dominates this film from the 40-minute point to the finish. (I couldn’t say “start to finish” since he makes his entry around three quarters into the first hour!)  People typically wax eloquent about just the ingenuity, wit and sarcasm of his lines.  But in Swarnamukhi, he is a magnetic presence.  His body language is so assured, his large eyes so evocative and the vocal intonations pitch perfect that it is impossible to take your eyes off him.  Even his use of props like the bubble gum, Swarna’s slippers, the thaali, the anklet bell and the kari (with which he writes Swarna’s name all over the walls of his room) is expertly purposeful.  Every prop he uses gets a completely unexpected ‘climax’ of its own, none more so than the kari, which is part of the stunning sequence which I am about to describe.


There is a nine-minute sequence which spans across two scenes - Swarna’s mother visits Pandian to request him to gracefully exit Swarna’s life, thereby allowing Swarna and Aakash to unite.  A maelstrom of escalating emotions from anger to indignation to devastation envelops Pandian.  This is where Parthiban summons all his acting chops.  The way he implodes with grief (once Fathima Babu leaves the house) is deeply moving – the manner in which he collapses to the floor is just about the perfect finish to this scene.  In what is an inspired editing choice, we cut straight to Devyani’s house.  The mirudangam that accompanies Parthiban’s entry into the house (slippers in hand) adds to the menace and sets up the scene brilliantly.  What follows is a tirade where Parthiban’s dialogue delivery is seen in its full glory – note the way his voice cracks when he says, “manasu poora nee thaan dee irukkey…”


Click on the play button below to go directly to this sequence:

The movie has a melodramatic, slightly contrived finish (starting at the 2 hr 25 min point in the video above), where Pandian pretends to be a lustful, vengeful devil in order to unite Swarna and Aakash without letting them know of his sacrifice.  Here again, Parthiban skillfully juggles between several notes in his performance, always seamless in transition, never discordant.  The final line of the movie is an apt culmination of this actor’s showcase -- in a standout acting moment, he fiddles with the anklet bell (that is hanging around his neck) as he talks about fading out of Swarna's life.  As the character extricates himself as a point from the love triangle, the actor simultaneously finishes etching an indelible mark in the minds of the viewers.  As an unabashed admirer of the actor, I can only hope that he gets to make a mark in many more impactful pictures.  I have reason to be hopeful because the imprints of a man who has chalked out his own paadhai seldom get erased by time or tide!