Inspirations (21 of 25) - The late filmmaker Manivannan

That line, written by Manivannan and delivered by Sathyaraj, in “Amaidhi Padai” is symptomatic of a lot of what made Manivannan an important figure in the annals of thamizh cinema history.  Firstly, the mixture of sardonic wit and forthrightness.  Secondly, the disdain for caste obsessed, hypocritical politicians.  And finally, the actor who delivered that line – Sathyaraj.  Sathyaraj has always been lavish in his praise for Manivannan and the role played by him in shaping up his career as an antagonist, anti-hero and as a leading man.  Their professional collaboration and their friendship that lasted till the day Manivannan died, was something unaffected by the highs and lows of their careers.  Above all, the answer to why Manivannan is an inspiration to me than just another writer/director that I admired is a combination of his powerful story lines and sharp, thought provoking dialogues on dicey topics such as corruption, communism and rationalism.  It is because there were - and there are - very few besides him that have demonstrated a deep understanding of these topics and fewer that have had the guts to write about them. 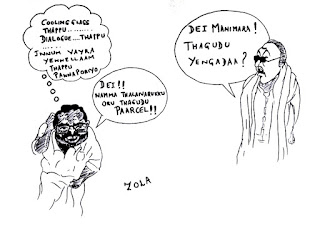 Special thanks to Ravishanker (pen name Zola) for the cartoon that he created for this post.  His many fantastic cartoons and nostalgic write-ups can be found at https://thezolazone.wordpress.com/

Manivannan was extremely prolific as a writer and director in the 80s.  The rate at which he churned out movies meant that there were a clutch of some forgettable movies.  But when he chose a theme that focused on his deep rooted beliefs and when he got actors to do justice to the material, he was in the zone.  To me, the two best movies of his career were “Ini Oru Sudhandhiram” (1987) and “Amaidhi Padai” (1994).  The former, starring Sivakumar, was a moving tale of a freedom fighter who had to fight for his rights long after India achieved Independence.  The latter, of course, featured Sathyaraj in arguably the best villainous role of his career.  If you watch these two movies back to back, you will realize that the movies are as different as night and day.  One is almost an art house drama.  The other one is a mainstream melodrama.  One is a dead serious film.  Another is a heady mix of a satire and a family drama.  But in both movies, Manivannan’s writing sizzles.  The seamless segues in his screenplay, the dazzling array of word plays, the depth and meaningfulness of his thoughts and the free flowing nature of the expression of his thoughts were all uniquely his.  Also, at his best, Manivannan was a master of economy of scenes.  For instance, in “Amaidhi Padai,” to establish the uneasy truce under which the husband (Sathyaraj Senior) and his wife (Sujatha) live in a house, he came up with just one scene.  It is the scene where a party man visits his house, requesting Sathyaraj to name his newborn child.  And when Sathyaraj hands over the infant to Sujatha asking her to bestow a name upon the child, she names the child Thaayama, the innocent girl that Sathyaraj cheated in his youth!  Sathyaraj stares furiously at Sujatha for a second but quickly smiles since he is unable to react in the presence of others.  To add insult to injury, Sujatha then asks him to whisper Thaayama in the ears of the child three times!  In this and many other sequences like the unforgettable election sequence, Sathyaraj was in stupendous form.  It is no overstatement to say that they were the Martin Scorsese-Robert de Niro pair of thamizh cinema.  Both parties in the duo were good on their own but when working together, they generated sparks that were of the highest voltage!

Manivannan inspired me in two ways – to love all things thamizh and to think about sticky issues that pervade our society.  He rarely did this in a preachy manner.  (I was quite stunned when actor Prashanth mentioned to me that Manivannan came to the shooting spot with nothing written on paper.  He would pen dialogues on the spot!  How he could pen such sharp, thought provoking lines in quick time is astounding to think about.)  In the brilliant jaathi kalavaram sequence in “Amaidhi Padai,” he highlighted the unfairness of the caste system and the exploitation of caste differences by politicians.  Sample this exchange:
Manivannan: “Indha Jaathi Karumaandharatha Yaaru Kandu Pidichavan?”
Sathyaraj: “Mandhram Oadharavanga Kandu Pidichaange…Adha Mandhiri maarunga gettiya pudichikitaange!”
Manivannan: “Apo indha jaathi-ya ozhuchitta makkal sandhosham-a irupaange pola irukkey!”
Sathyaraj: “Jananga sandosham-a irupaange…naama thaan soathuku dingi adikonum!”

It made you laugh.  But it also made you think.  That was the success of Manivannan.  His untimely passing away (he was 58) three years ago was not just the death of a man.  It was the death of intelligent satire in thamizh cinema.  And, it was the death of bold rational thought and free expression of such thoughts.  For that, we have to mourn even more than just for the death of a person.  But as Sathyaraj said in a movie, “Puratchikaaran Pudhaika Padarthille…Vedhaika Padraan.”  With just a handful of his creations, he certainly did sow the seeds of meaningful thinking in thousands of Tamilians.  And in that harvest were also sown the seeds of his immortality.

PS: This write-up was decidedly focused on Manivannan, the writer/director and not the actor since it was the former that truly 'inspired' me.

Inspirations - An audio interview with Anu Hasan, author of “Sunny Side Up”

Note: Usually my "Inspirations" write-ups are essays about the subjects of my inspiration.  This one is a little different - it is a Skype audio interview.  Please read on for a bit of context before you get to the audio link below.

At 5:28 am this Sunday, two minutes before the start of our scheduled Skype call, I texted Anu Hasan – “Remembered your driver anecdote, which is why I didn’t call early J”  One of the hilarious anecdotes captured in her lovely, sunny book - the aptly titled “Sunny Side Up” - is one involving a driver from a production company.  Known for her amazing punctuality, Anu had had a tough time repeatedly giving this driver instructions that he had to pick her up at 7:45 am.  7:45 am! NOT 7:25 am, certainly not 7:55 am!  This was fresh on my mind ever since she committed to a call at 11:30 am UK time on Sunday (5:30 am in Chicago, where I had traveled to for a conference.)  Let’s rewind to a couple of months back…

The moment I finished reading “Sunny Side Up,” I instantly knew that it was the third non-fiction book, after Randy Pausch’s “The Last Lecture” and Sheena Iyengar’s “The Art of Choosing”, that made me hold a mirror to myself and look intently.  In my opinion, when a piece of literature does something to you, you thank the author.  And, thank them properly.  I wanted to go a step further.  I wanted to understand deeper why I was feeling certain changes in myself.  I had shared my  review with her on Twitter, which she responded to, very kindly.  And, when my wife suggested that I request her for an interview, I did.  And, much to my joy, she promptly agreed.

Thank you, Anu, for your time.  And, for all the 'sunshine' J

Here's the link to a youtube playlist that contains the audio of our conversation.  Below the link, I have included the list of files in the playlist in case you want to pick and choose topics.  Below are also a couple of quick references (to things in the conversation) for those that may not be familiar with her book or her recent interviews.  Take a look at these before listening to the audio so that you can follow along.


Jacob – One of the unforgettable chapters in the book is the one on her friends, one of whom was Jacob, who passed away very young (in an unfortunate accident).  She outlines a checkered yet fascinating relationship that came to an abrupt end owing to a cruel quirk of fate.

The BITS Pilani Advice  – Anu Hasan’s father gave her a terrific piece of advice when she called him from BITS Pilani during her first year.  She admits to venting her frustrations only to be asked by her Dad, “Why do you think I sent you there?”  When she innocently responded, “…to study,” he told her, “No, I sent you there to learn about life.  You just did.”