My phone call with Suresh Krissna (the director of Aaha)

If you know the title of the book co-written by film director Suresh Krissna, you will realize the small irony of the title (and the film mentioned in the title) of this post!  Krissna's book was titled, “My days with Baasha.”  In that book, he lovingly recollects many of the behind-the-scenes moments of his four movies with Rajni - Annamalai, Veera, Baasha and Baba.  But to me, the crown jewel of Krissna’s career - and, I said this to him - has been Aaha.  And, at the very least, I wanted to do two things in this call with him – to express my admiration for the movie.  And, to learn a bit about how he approaches his craft.  Only a few days ago, I had requested him for a 30-minute call.  (Special thanks to Rekhs for introducing me to Krissna.)  And, he kindly agreed.  10 minutes before the agreed start time of our call, I received a message from him that read, “Hi Ram, I am ready…10 min before schedule…U take ur time J”  Continuing in the same vein, in our call, he came across as extremely warm, humble, generous in his praise of his team members and pragmatic about the evolution of cinema and television in recent years.

In recollecting his experiences of making Aaha, he credits the late Ananthu (who was K Balachander’s Man Friday and Kamal Hassan’s guru; as an aside, Krissna was a KB protégé) with planting the genesis of a movie that would be markedly different from the kinds of movies that Krissna was making till then.  When we spoke, he fondly referred to Ananthu as a “walking encyclopedia” who invested him with varied perspectives based on his rich exposure to world cinema.  At the same time that Ananthu was goading him to step out of his comfort zone, Krissna also had a producer (R Mohan) approach him to do a “nice, compact, sweet film.”  And, the result of the Suresh Krissna (story, screenplay, direction) -Ananthu (co-screenplay writer) - Crazy Mohan (dialogues) combination was, of course, a film that was way beyond just a nice, compact, sweet film – it was a deeply sensitive, genuinely funny, touching tale with some remarkably lifelike characters. 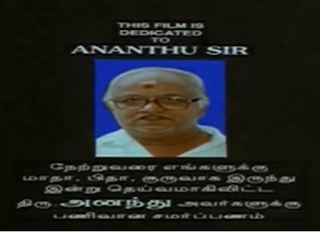 Click on the link below to hear Krissna’s 10-minute story of how Aaha came to be made as well as the touching story of a fan whose real life situation resembled the climactic portions of Aaha but not quite:

Changing gears, I was interested in hearing about his experiences working with character actors.  I asked him this question since I have noticed that his films have had some stellar performances by actors in character roles – Manorama in Annamalai, Sarat Babu in Vedan, pretty much everyone in Aaha (!) and so on.  He spoke fondly of the nurturing that he had received when he had apprenticed under KB and how the latter would focus on extracting something noteworthy from the smallest of actors.  And, talking of character actors, to me, the best part of my conversation was when Krissna spoke of Raghuvaran.  It was extremely touching to hear the pain and affection in his voice when he spoke of his friend.

In the clip below, he speaks of his friendship with Raghuvaran as well as his experience in working with Manivannan in Sangamam (another great role and a wonderful performance).

I was also interested in hearing about his rapport with cinematographers since certain films of his have had absolutely top notch production values but don’t always get lauded for them.  And, from his response, I could gather why.  He spoke of how, for instance, cinematography should serve a purpose and not call out attention to itself.  He gave me the example of Aaha where the primary purpose of the camera was to give a feeling that we were in the house with those lovable characters.  So, the framing of the foreground and background and how characters came in and out of the frame was to take away the feeling of a stage drama (given the extensive interior scenes in the movie) and instead, give a feeling that you were in the midst of people that were behaving naturally, not acting out a scene.  I haven’t seen the Telugu remake of Aaha but he mentioned that the Gokulakshtami sequence in this version was done in one, uninterrupted 10-min shot!

In the clip below, he talks about cinematography that serves a purpose:

Towards the end of our conversation, we spoke of his recent work in television.  It was reassuring to hear that one of his goals was to take his sense of aesthetics to the small screen.   And, one of his other attempts is to blur the lines between the silver and the small screens.  To this end, he has made a movie titled, Hitler: Engirundho Vandhaan (shot in nine days, replete with two songs) that will be telecast on Zee Tamizh on May 29 at 3:00 pm.  It features seasoned veterans like Delhi Ganesh and Devyani along with newcomers.  Knowing his work, I am sure it will be a well-written, well-made film.  Below is a teaser:

As we inched towards the 30-min point of our conversation (that he had agreed to), he realized - without my saying it out loud - that I had a few more questions left!  And, he graciously agreed to giving me 15 more minutes.  I was bowled over by his kind gesture.  A day after the call, I listened to the recording (of our call).  Above everything else, what struck me was the gratitude, affection and recognition that he accorded to everyone that he had worked with, starting with his gurus KB and Ananthu to every actor and technician he had worked with, without an iota of rancor about anyone whatsoever.  After I listened to the recording, I finally realized where all the kindness, warmth and feel good vibes in Aaha came from!

Ram Murali : You've now taken your engagement with cinema to the next level ! Kudos ! This format is unique. Great insight on the framing of the movie Aahaa i.e re: giving the feel of being amongst a close knit family. Actually its news to me that Krissna directed this such an unKrissna like film. This new format of yours could be a game changer as far as Thinkinggotloud is concerned. Ah ! The pressure of expectations ...:):)

Thanks for your kind comments and constant encouragement, Ravishanker! Yes, "Aaha" was completely unKrissna like as you said. "Oruvan" was also a very good movie - very underrated.
Thank you, once again.

Ram Murali : Oh and how could I forget ! Great to hear your voice for the first time ( atlast) !

:) Thank you, Ravishanker. I am sure it won't be the last time. I look forward to connecting live when I come to Madras or when you come to the US.
PS: It will always be Madras for me, not Chennai. Senthamizhan Seeman kochinda paravaille :) :)

Ram Murali : Absolutely ! Madras it is ! Madras is more than a city - its a state of mind !

You said it!
I see "Mummy returns" type memes flying thick and fast with JJ's victory. How're things there?
My favorite meme was one with...who else, Vijaykanth. They posted a pic of his and the text read, "Enaku meme poteengaley...vote potengala?!"
Another one has MK saying to Stalin, "Andha Amma jeichadhu kooda paraville...aana indha Azhagiri kalaaypaaneda!"

Ram Murali : Yes - The Mummy Returns is omnipresent. I think you're more au courant than myself with respect to the memes ! "Enaku meme poteengaley...vote potengala?!" ROFL.

Ravishanker - I have been getting some hilarious memes on Whatsapp. Feel free to send me a message on Whatsapp. We can use that to chat outside of memes too, of course.
My number is 1-412-512-1356.

Ram Murali : Great catching up with you on Whatsapp.
Thank you Thank you so much for highlighting my blog in your space !

My apologies if I'm not responding ove rthe next few weeks. Son's 12th Board results have been announced and now I'm caught in that mad space of college admission, cut-off lists, etc etc
By God's grace he's got close to what he expected. To be spared is blessing alone nowadays considering the experiences of few other bright, intelligent, hardworking kids that we know and root for.

I really wanted this to reach SK. So, posting this here hoping that he might come to your space frequently -- https://sai16vicky.wordpress.com/2019/04/07/the-quintessential-rajini-movie/.

Hi Sai - I shall share this with SK Sir via Whatsapp. Very nice write-up from a true fan of Annamalai. :)

Thanks a lot, Ram! Glad you enjoyed it :)