How mighty is the pen in Thamizh cinema?

Disclaimer: This is not a comprehensive thesis about an exhaustive list of writers; rather, it's just a collection of some of my thoughts.

I watched Samudrakani’s Appa last Thursday.  And, I woke up Saturday morning to the sad news of the great ‘Vietnam Veedu’ Sundaram passing away.  Sundaram, for those that might not know him, wrote three back-to-back classics with Sivaji Ganesan – Vietnam Veedu, Gnana Oli and Gowravam (which he directed) - in the early 70s. 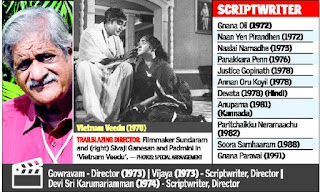 Image Courtesy of "The Hindu"

Samudrakani dedicated Appa to K Balachander, one of the finest writers in thamizh cinema.  He might as well have dedicated the movie to Sundaram and every writer that meant something to thamizh movies.  This is not to say that Appa is a classic or even an instance of Samudrakani scaling a peak as a writer.  But the film is a throwback to an era where writing meant something.  It’s a very thoughtfully written film.  There are some lines that pack tremendous punch.  Alas, there’re the stagey and preachy elements that so many critics lament about.  More on that later.  But my point is, love it or hate it, there is no denying the fact that writing was given paramount importance by the filmmaker.  Even if you could argue that the content did not hold appeal to you, there was something about the flow of the screenplay and characterizations that made it abundantly clear that Samudrakani approached his subject matter with utmost sincerity even if what was on paper was not completely transformed into a wholesome cinematic experience.

Evaluating a movie in terms of its form and content is an approach that I adopted ever since I first read some of Baradwaj Rangan’s pieces.  It is a very simple yet meaningful way of evaluating movies.  But where I am not on the same page – in fact I am not even in the same book! – with Rangan is when it comes to the relative importance of the two.  The well-informed critic that Rangan is, is invariably pained by Thamizh cinema not going to the next level in terms of form – that we don’t have enough directors who have a sense of the medium and the tropes that must be used purposefully.  He has written multiple times that if he were to only get one of the two, then it would be good craft even if the content is not spectacular.  It’s a completely fair point.  But it’s not something that I agree with. I'll tell you why.

Veteran filmmakers like Mahendran as well as newer directors like Karthik Subburaj are forces to reckon with because of the mastery that they exhibit over form.  But we have several other filmmakers that get by with content that is sometimes inane, sometimes misogynistic, sometimes downright irresponsible that I feel like saying that if I can watch a film that exhibits complete mastery over both form and content (Udhiri PookaL and Iraivi, to name two completely different movies where I both  loved the subject matter and admired the craft) then that’s great.  But if I can get only one from a director, please give me content…any day of the week.  When I see films like Trisha Illana Nayanthara become huge successes and films like Appa become average performers, it pains me.  It is not because I am such a prude that I won’t watch adult humor.  It is just that Trisha Illana... was painfully unfunny – the jokes weren’t even built up well and there seemed to be nothing in the writing to reflect thoughtfulness around the structure or characterizations.  Contrast that with Appa– sure, it’s stagey.  Sure, it even looks and sounds outdated.  But there is some solid writing that lifts several scenes.  I watched this movie last Thursday.  And, over the weekend, several of the thoughts and - gulp! - "messages” from his movie made me think of my own role as a parent.  That is the success of a filmmaker, using a powerful art form to make someone introspect.  And, that, my dear reader, is also responsible film making.  Even if he might score 10/50 for form, it’s at least 40/50 for content.   50/100 - Let my glass be half-full this way. 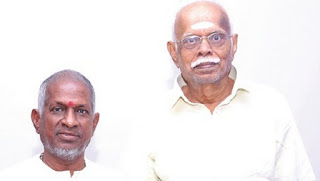 Image Courtesy of “The Indian Express."

The passing away of another industry stalwart this week – writer, lyricist and producer Panchu Arunachalam- is also a sad, yet timely reminder of a time when writers were given a lot more importance than they are today.  Arunachalam was the writer of most of Rajnikanth’s blockbusters in the late 70s and 80s.  Even when Kamal Hassan decided to go berserk in the commercial sense, Arunachalam was at the fore, writing movies like Sakalakala Vallavan.  During the 80s, there were other respected writers like R. Selvaraj (Mudhal Mariyadhai), P. Kalaimani (Gopurangal Saivadhillai), Visu (apart from being a director, he also wrote the screenplay and dialogues of movies with stars, like Rajni in Nallavanuku Nallavan) and AL Narayanan (Vazhve Mayam, Kaaki Chattai).  Writers like Arunachalam and Kalaimani had turned producers as well.  In what was truly a sign of prominence given to the writer, Mudhal Vasantham, directed by Manivannan, ended with a card that flashed, “A film written by P. Kalaimani.”  If you think that the content of these movies was nothing spectacular, you may be right in your own way.  But these writers ensured that there was a sense of coherence in the screenplay and some good use of thamizh in their dialogues, sometimes even creating a bit of an emotional connect despite the high masala quotient (Nallavanuku Nallavan, for instance).  Also, that was one type of film that they wrote.  Arunachalam, for instance, also helped create some truly meaningful cinema in that period.  The same person that wrote Sakalakala Vallavan also wrote movies like the sensitive Aarilirundhu Arubadhu Varai, in which Rajni turned in a delightfully understated performance, and helped shape the screenplay and dialogues of powerful dramas like Mann Vaasanai and Pudhumai Penn.

Those last two movies that I mentioned lead me to think about something else that Rangan has written about.  And, that is, how directors like Martin Scorsese have worked with writers like Paul Schrader, shaping the writer’s content according to their tastes and sensibilities to come up with a product that bears a writer’s stamp that’s blended with the director’s vision.  Our directors like Bharathiraja, Mani Ratnam and Shankar have routinely worked with preeminent writers like Selvaraj, Sujatha and Balakumaran to create some timeless classics.  This points to the need for a systemic change in thamizh cinema that celebrates directors and actors and very rarely gives writers their due respect.   And, it is that respect and recognition that we afford to current and future writers that would make the souls of writers like Vietnam Veedu Sundaram and Panchu Arunachalam truly rest in peace.
***

Ram Murali : This is a brilliant article up there with your best ! And a daring attempt if I may say so because the topuc demands atleast a book. Still re- reading it to digest the many points you have made.

Ram Murali : My favourite line from the article - "And, over the weekend, several of the thoughts and - gulp! - "messages” ; Juxtaposed with the line you were taking in the debate of form over content this line is a howitzer. Short bathaanay ka sweet bathaanay ka. No unnecessary verbiage.

All taken together a passionate article on writing by a writer.

After reading this , makes me think what would have happenned if by some ovarian-cum-geographic lottery Panchu Arunachalam was born in Hollywood, he would have been feted on par with the versatile Victor Fleming who could go from directing a Gone With The Wind to a diametrically opposite Dr.Jekyll and Mr.Hyde.

Thanks for the Mudhal Mariyadhai to these unsung stalwarts.

I sincerely hope we're heading in the direction of recognizing that even great performances starts with great writing. Actors crib that they had to summon up every ounce of their experience to make sense of a mediocre script. The converse is also true.
Great writing manipulates the audience to act out the scene in their own heads and identify with the two dimensional shadowplay happenning on a piece of giant white cloth.

Before I forget Thanks for mentioning my "favourite" (???) AL Narayanan :) :)

Thanks, Ravishanker, for your detailed response.

"Actors crib that they had to summon up every ounce of their experience to make sense of a mediocre script. The converse is also true."
--> Great line of thought. Sattai adi!

"Before I forget Thanks for mentioning my "favourite" (???) AL Narayanan :)"
--> Apram ena neenga 'art'less-nu sollirupeenga ;-)

Agreed with everything u said ram! A fantastic read !

Anu - thank you so much for your kind comment. Much appreciated.