Of late, I have been reading this series of articles on Cricinfo titled, “Come to think of it.”  Taking a leaf out of my favorite cricket site, I am starting a series titled, “Missed Spotlights.”  In this series, I am hoping to shed light on performances, aspects of a particular film’s craft or entire movies that, in my opinion, didn’t get the spotlight that they deserved.  So, without further ado, let’s start with a performance in a film that has reams and reams of literature dedicated to it.  But hitherto, I have not read even a paragraph on what I reckon to be one of the finest supporting roles and performances – Karthika, who plays the grown-up version of Kamal Hassan’s daughter in Nayagan. (Neena played the younger version.) 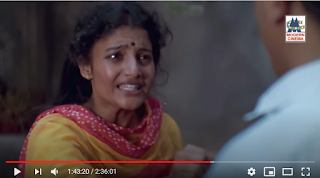 When the entire world (of this film) kowtows to the ageing yet commanding Don, there are two people who stand up to him.  One is the intrepid police officer (played by Nasser), who aims to bring him to book.  To Nasser, nobody, irrespective of their good deeds, is above the law.  Karthika, much before Nasser tries to nab her father, tries to impose the manacles of humanity and reasoning to restrain him.  Of course, the Godfather has rules of his own making and a value system that he had believed in over several decades.  The clash of ideals is the focus of the spectacular confrontation scene between father and daughter.  As arresting as Kamal is in the sequence, Karthika is equally feisty and fiery in this verbal duel.  Right from the moment where she expresses mild irritation at his attempt to fix her hair to her stunned look as she is kneeling down next to the basil plant, Karthika brings to life Balakumaran’s razor-sharp dialogues with the assurance of a veteran. (Mani Ratnam’s attention to detail is astounding.  After Kamal’s slap, notice her cheek closely and you will see fingerprints.)

The other scene where she sparkles is the telephone conversation with her father.  The much-feared gangster, who had refused to pay heed to his daughter’s pleas or respect the boundaries of jurisprudence, sees the plight of his devoted followers in the hospital.  After seeing them in a sorry state, he decides that he is going to surrender to the court of law.  By now, the daughter is married to the very inspector who has been trying to capture him.  What ensues is a poignant conversation, the highlights of which are actually the meaningful pauses more than the words.  Karthika makes full use of her expressive eyes to do full justice to this scene, especially the part where Nasser thinks he has caught her red-handed.

One of the features of Mani Ratnam’s early work was how different and realistic his heroines looked when compared to actresses in the mainstream fare that was dished out in the 1980s.  Here too, Karthika’s lack of conspicuous make-up and her simple, elegant costumes add to the realism that Mani Ratnam strove for in the drama.  The black saree that Karthika wears in the climax somehow looks perfect, given the heavy-duty emotions and the impending tragedy.  I state these seemingly trivial details to underscore the fact that all these elements play their own roles in making a performance believable.  That these choices by the filmmaker are in service of a sublime performance make them indispensable even if they are hidden in plain view.

Apart from Poovizhi Vaasalile and Nayagan, there are no other Tamil movies that I remember seeing Karthika in.  But given that she had superbly etched roles in undisputed classics, it would be a travesty if her roles were to be forgotten.  After all, a shooting star is special in its own way, a spot of light that is not to be missed!

Wonderfully talented actress who was powerful in her confrontation scene in Nayagan...an actress who was too choosy about acting a chartered accountant to boot retired early from films but left us with sone unforgettable roles both in malayalam and just two films in tamil .